Sept. 2, 2011
Again we left a day early.The weather was good and calling for us to ride out of the humidity.Though the fog hindered our start it took us an abnormal amount of time to just get to the highway,but still we made it to Brennan in record time!
Posted by Karen at 7:00 PM No comments: 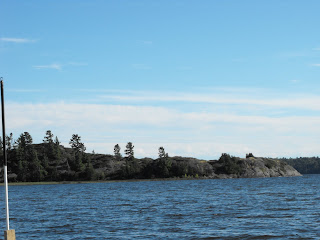 (Posts begin at bottom of the page) 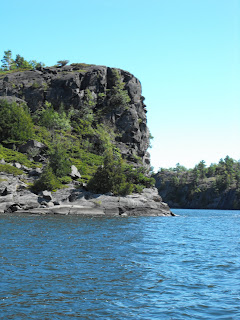 Sept. 10, 2010
So its our last day and the sun is out a few clouds,but hey this is it.
We get out early and the day gets nicer and nicer the wind is virtually gone, and the temp. is getting higher. Lovely day. But not for fishing, it was a clam-fest! At least we were able to check out a few other spots that were more than 5 minutes away now. We checked out a few of our spots from the previous year, like Little Detriot and even came close to checking out the Benjamin Islands,though we had no clue how close were till later.
We go in a little early so we can pre pack the car, and have dinner. The talk is again...all about the weather, (by this time we are all out on the lodge's deck enjoying the scenery), but for once how much nicer it was on the water. By late afternoon we have found freedom from coats and sweatshirts. Everyone arrives for dinner in short sleeved shirts! Yes I know unbelievable! We have now, and for the last few days, all sat at the big people's table all together rather than craning our necks to talk. We check out with Casey, say our good byes, re booked for next year week of Labour Day. Everyone's pretty quick to head out to see if we can salvage any fish from the lake,for the last couple hours of light.
To no avail.  So we went in and called it quits for 2010.
The morning came and we said goodbye to lake & headed out.
So that my friends is Fishing In Spanish 2010. If you ever can make it up there even for an overnight stay you'll be glad you did.
My husband and I have done a fishing trip for a few years now, have hit Temagimi area,Parry Sound, Rice Lake, Huntsville, and the great lap-of-the-lake on Nipissing (which has too many resorts to choose from!), and last year was the the first year we re-booked as we checked out. I still don't know, James and Casey, if it is the fishing or the location, but I do know its the people of Brennan Harbour Resort that keep us coming back!! See you in 2011!! 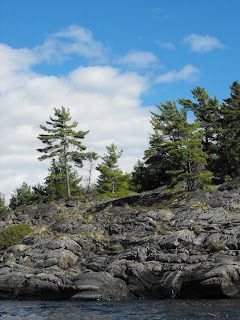 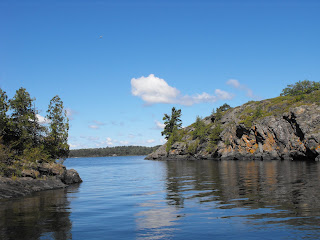 Some actual pics of this year, mostly done on this last lovely day!! 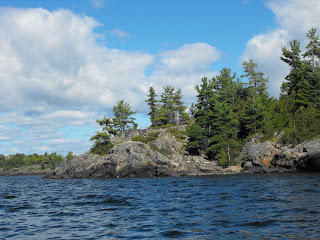 Email ThisBlogThis!Share to TwitterShare to FacebookShare to Pinterest
Sept. 9, 2010
So normally we are clocking 8-10 hrs on the boat a day on this annual fishing jont. But I think  we've paid Mother Nature to clean off our boat this week. Yes again not looking too promising, and it seems a little colder out today too.We headed up to the lodge with coffee in hand, to again, kill time till the weather accommodated, and hang with our fellow fish folks. Shorty comes into the lodge & chats about with all of us, then asks us to try a spot he thinks might be worthy. Its a short trip,straight out the bay, hang a left and look for the two islands named  blablabla....Okay so heres the thing, there are very few islands actually marked with names, and the two that I know of are Vance's Bay, they are marked on either side of the bay. So when our Shorty tells us by name where to go or where we've been....we have no clue. You have to remember that all these little islands are pretty well named but an island to you and I may not be to Shorty. You kind gotta give him some idea...like..."You know that island with the rock and the tree that's kinda bent...." Which describes all the islands out here!! We take our time to get out there and the sun is trying to peek out. We get out to what we think is the area he mentioned and we see "Dad and Dave" out there and a few others from another resort Blue Heron. Dave is getting quite proficient at catching clams out here.The man has talent!!! Crap its getting cold.....oops that was not my inside voice. The wind is making us drift quickly,which means I am multi- tasking,reading, drinking coffee and moving the boat.
Another hour later we decide to hit our hole. By which time I am officially freezing and have McGivered the Thermos bag and safety vest around my legs. By this time even Graham is feeling the chill,we go in for lunch and get warmed up. Now as I mentioned we have forgone any and all traditional things we have done in the past for this trip.I mean really, how many years do we pack the winter coats, fleece wear, gloves and heavy duty fishing shoes & wool socks and never use them? Now the winter coats were going no matter what,it only took the one trip up to Rice Lake years ago when it started to snow and we ran into town to buy new ones, that was not going to happen ever again! So I really had very little to layer with. But I layered up like a true Canuck! 4 layers on top, 2 in the middle and 3 on the feet!!
We didn't have too much luck that day either a couple small fish.
The talk at the lodge at dinner was,not how many we'd caught,but how many layers did you have on?
Posted by Karen at 4:55 PM No comments:

Email ThisBlogThis!Share to TwitterShare to FacebookShare to Pinterest
Fish Fry 2009 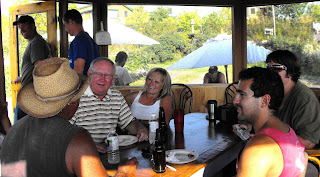 Sept. 8, 2010
I rise at 6:30 am...why I think to myself, will the weather be any better today?The darkness in the cabin suggests,that either the clock is wrong or....you guessed it its raining. I settle in with a cup of tea and look out the bay window at the show. Winds a blow'n, and grey clouds are moving quickly.  Rain is coming  I can sense it, then it happens, thunder, it settles down in few minutes.
But still its looking like it may be a couple hours before it could clear. Second cup of tea.So now the show really begins, theres the thunder then the lightening.From our window we are sitting back and watching what Mother Nature is putting out.It keeps coming,every time we "Ooh" from the left the right of the bay shows another clap ! By this time I have sent hubby up to the lodge to see if theres room for us for breakfast. Again,we only booked in for the evening meal,so this is the time when I would be making our lunch for out on the boat, but at this point I may not have to bother. Hes back and its "completely fine" Casey says, for us to join the Breakfast Club.If nothing else this week our timing was good. We are getting ready and we see  the two young guys, whom I could not name earlier going out on  the boat!!! We made it up to the lodge as the thunder and lightning is joined by huge winds and rain.
So all the talk is about how these two young guys looked like they were fleeing the country heading out in this weather. With the binoculars we can just barely see where they are, they are straight out of the bay. James is doing what he can to cook and and not pace while thinking if hes going to have to go out and get these two. Rule of thumb, if you wouldn't let your dog out in this weather why would you go?Lightning.... aluminum boat...mmm.Ah, I guess we all did things that seemed alright at the time when were younger, and maybe they thought they'd beat the weather out there and it would clear up,who knows. At this point we all have a table at a window and are craning to see the ongoing lightning and eating to see if these guys are coming back. James mentions that it will be a costly for them if they have to call the helicopter to get them. Perhaps it was then, after a suggestion for a volunteer rescue attempt, (with no takers) Casey decides to try their cell phone, sure enough,she gets them to come in. But I'll tell you it was getting worse by the time they even reach our bay, and though they would not admit it I'm sure, we could tell they were having a heck of a time getting back with the white caps and all. Bet mortality kicked in though!
We all had another cup of coffee, and the bets started on the wait. It started to clear up after an hour or so, and we all went out. The rest of the day was still a little chilly, but much better than it'd been the previous days. So I was out there trying to brake the heal of my second book of the week,it didn't take. The sun was coming out and looked like it was going to stay. Now I'm not saying it was warm, I'm not even mentioning that my winter coat and I were becoming the best of friends. So I let out a line. I kid you not I had just moved to the front of the boat and sat down when I started to get a nibble. Two minutes later I landed my biggest catch to date,(pic below) a Walleye,but alias it was in  the slot,so back to swim free it went.Was ready to sing the theme from "Born Free", but that would age me. Then Graham landed a catfish, then another. So this was our spot for the week. 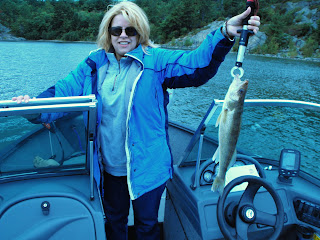 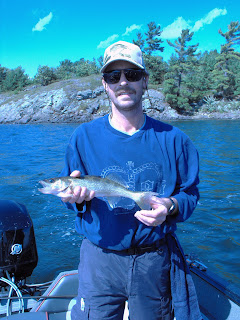 (Yes,I know this is one one of of the other catches of the week,not a Catfish.)
Today is Wednesday, which means Fish Fry day at the resort I will throw in some of last years pics again. As it was so cold again the fish fry was held up in the lodge,James does a great job with the fish, and the ladies in the "background" (we'll call it this as kitchen seems to antiquated) do a great  job with the potatoes,cole slaw and baked beans. Yummy! Normally its held in the gazebo that is located in the center of the resort, and you get to have a drink and a chat with some that you may not have met yet.
We fished after dinner that day too,only after we'd gone up and gotten more bait from the Bait Queen Evelina . Evelina is James and Casey's 1 year old,what a sweetie! When ever you need bait she hands it to you with the cutest smile,then acts all coy!! So what looked like we would be rained out that day turned out to be one of the best days. Only in Ontario folks!!

Sept. 7, 2010
As with the weather, the days are running into each other and there wasn't too much to talk about on this day. We had a short reprieve this after noon but not too long. Graham caught a few small mouths, but practised his catch and release. But as with most days, Maggy , the Boarder Collie is at the dock to welcome us in. Milo resorts org. dog, is quite selective about if and when he would a scratch, and seems very happy to be the top dog and mill about at his liesure.
Posted by Karen at 4:10 PM No comments: